How could a movie that made no money and got its director fired and blacklisted for 10 years be so awesome? Episode #1 of Cinema Yakuza explores Seijun Suzuki’s epic piece of cinematic brilliance, Branded to Kill. Branded to Kill is a masterclass in action movie filmmaking. Its style and structure is unlike any other and yet, its influences can still be seen today.

Sex and violence is the name of the game when it comes to the gritty Yakuza film. Let’s take a look at what makes them so friggin’ entertaining, shall we?

Hello fellow cinephiles, and welcome to episode one of a new series titled, Cinema Yakuza. On this episode we look at Seijun Suzuki’s 1967 hard-boiled masterpiece, Branded to Kill. So pour some sake, boil some rice, and just sit back and soak up the style.

Branded to Kill follows Hanada, the Yakuza’s number 3 best hitman. One day on a job, a butterfly lands on the barrel of his sniper rifle causing him to miss his target. Now the Yakuza wants him dead.

The first thing you’ll notice in the opening scenes is the tone—laid back with the occasional loud spice, chill out jazz music, and ultra cool chiaroscuro lighting. This is a great film to watch at night.

See that guy with the chipmunk cheeks? That’s Hanada. He’s played by Jo Shishido. Remember that name—Jo Shishido is the guy when it comes to the Japanese Yakuza movies of the 1960s. Just look at those cheeks. As it turns out, he had cheek implants because he was told that he was too skinny to get leading roles. After the surgery, he thought he looked great, but now he chuckles at the mistake it was. He has since had the implants removed. Here he is during a 2011 interview for the Criterion Collection’s blu-ray release. He visited New York City in 2011 for the annual New York Film Festival and last year his house burned down, but thankfully he wasn’t home at the time. He is now 81 years old and has a really weird flash website—I’ll stick the link in the description.

We get our first big action scene 11 minutes into the movie. And this guy falling from the roof perfectly sets up the campy nature of the violence. Look, as this guy is dying, he puts his jacket over his own face, c’mon, that’s awesome. It’s very playful in its absurdity. This is a movie where the main character gets off on the smell of boiling rice. However, it is questionable how realistic the violence is meant to be. The first goal of these movies is entertainment, above art, message, or anything else. That means violence and sex and we get tons of both. This character is completely naked in nearly all of her scenes. For the sex scenes, they had to wear adhesive strips over their genitals that could be quite painful to remove. At a retrospective in 2006, Suzuki admitted that he told the actress that it was his job to put the adhesive strips on her. Clever dog— it didn’t work though.

The movie was put out by Nikkatsu, Japan’s biggest studio at the time. It was founded on September 10th, 1912 and was Japan’s first major studio. Beginning in the 1930s, when Japan started using sound in their films, the Japanese studios started modeling themselves on the Hollywood system. Nikkatsu was very much about filmmaking as a business. Back in those days, the directors were under contract to the studio. The studio would assign their directors a script and would choose the main actors and everything. The studio didn’t have a script for Suzuki, so he formed a group of 7 young writers called Hachiro Guryu that would hash out ideas with Suzuki and create a screenplay. They wrote a bunch of scripts, Branded to Kill was the first to be made into a movie. Suzuki usually rewrote the banal scripts he was given and put his own crazy spin on them. He would often still be rewriting as he was shooting. He welcomed ideas from his collaborators. For example, one of the writers, Yozo Tanaka, liked butterflies, so that’s why they used butterflies in the film. (Which made this set really difficult to dress because they kept falling apart). It was a very spontaneous, which is how Suzuki liked to work. He also used nearly everything he filmed.

These were supposed to be B movies—a cash grab for the youth without much lasting effect. Nikkatsu released two films a week. Every week. That’s 104 movies a year.

Branded to Kill’s budget was 20 million yen—less than half of the cost of the ‘A’ pictures at the time. Let’s put this in perspective: 20 million yen in 1967 is roughly $613,000 today. To try and raise more money for the film, Suzuki and the production team would go to companies and get them to pay to have their product featured in the movie. The most notable of these product deals was the rice cooker. That’s where they came up with the idea that Hanada would get aroused at the smell of boiling rice. 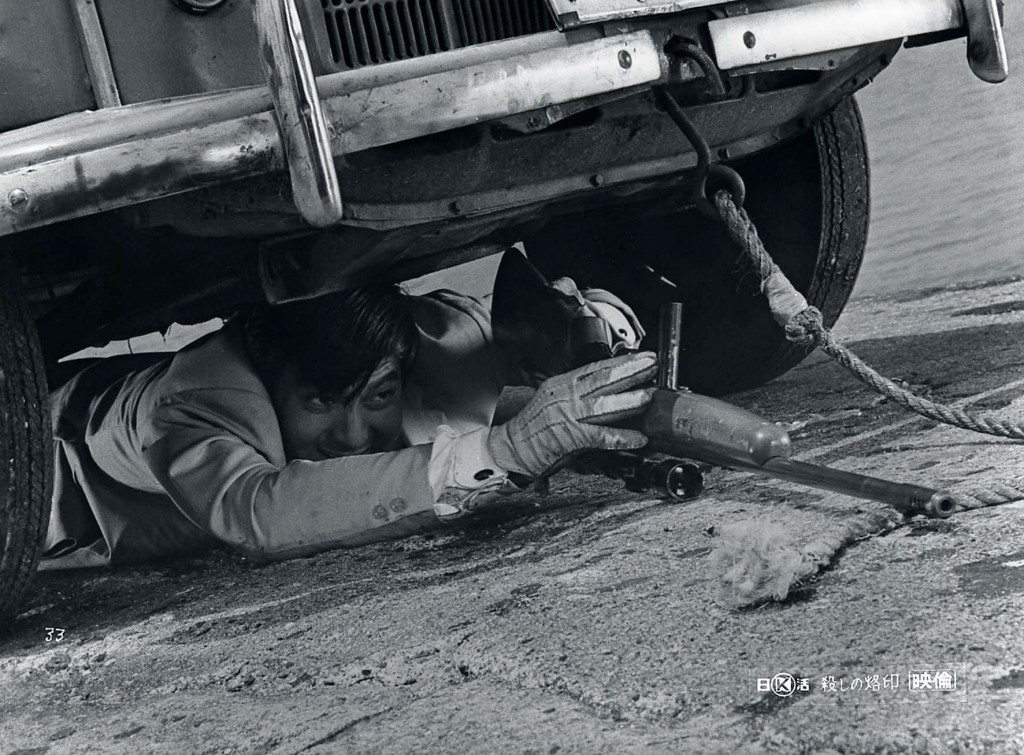 A lot of contract directors at Nikkatsu weren’t well known. Suzuki stuck out because of his style, which didn’t truly begin until he started making Yakuza movies. It’s amazing to see a movie as creatively brilliant and influential as this and find out that the director thought of his work as just a way to pay the bills. However, he took pride in his work and wanted to make an entertaining product. His goal? “Make it exciting and funny.” And “shoot each film in its own style.” He began experimenting more and more with narrative by subverting and defying genre conventions—a technique Nikkatsu was strictly against. They wanted their films conventional and formulaic.

After Branded to Kill was finished, Nikkatsu executives were upset because they thought it was (quote) “incomprehensible.” Because of this and its poor performance at the box office, Suzuki was fired from Nikkatsu. His contract pay stopped and the film was pulled. Many people came out to protest. Nikkatsu cut off access to all of Suzuki’s films. This was at the height of Suzuki’s career and he had a pretty decent following. Suzuki sued Nikkatsu for damages and breech of contract and won, but he was blacklisted by every studio for 10 years. He got by during that time by directing television commercials. One commercial even won him an award.

There have been a few references to Branded to Kill over the years, including this scene from Jim Jarmush’s 1999 film Ghost Dog: The Way of the Samurai. And perhaps this shot from the Beastie Boys music video Sabotage (directed by Spike Jonze). Quentin Tarantino and Park Chan-wook are big fans of Suzuki as well.

In 2001, thirty-four years after the release of Branded to Kill, Suzuki made a sequel titled Pistol Opera (which is just an awesome name for a movie).

If there is one thing to take away from this movie, it’s the definitely the cinematography. There are so many brilliant and creative shots in this film. This one is one of my favorites—it’s a shot from Hanada’s point of view that transforms into a tracking shot at the end.

Every single choice Suzuki made was for the enjoyment of the audience. And for a movie that sets out to be entertaining, it certainly succeeds.